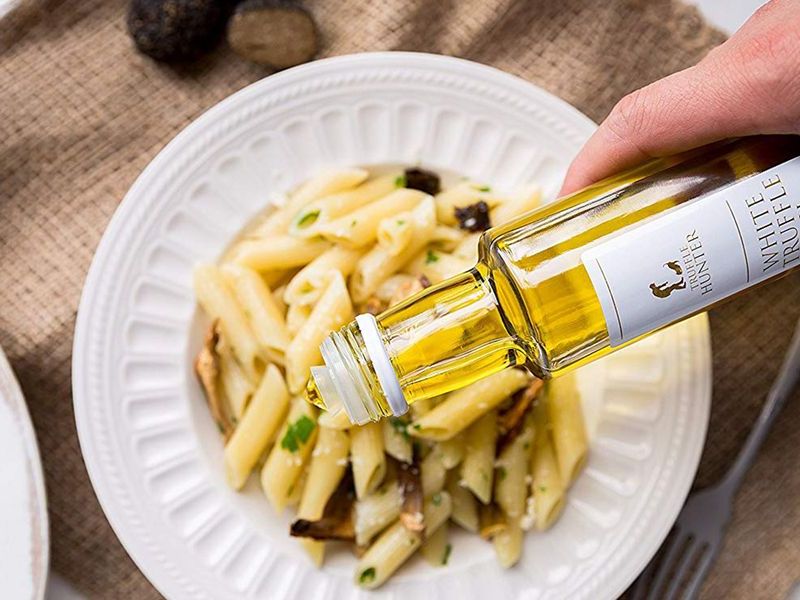 Truffle oil is an ingredient that has been used for centuries in cooking and is still the go-to for chefs today. It can be expensive, however, and hard to find. If you’re looking for a substitute for truffle oil, read on!

Truffle oil is an essential part of any chef’s pantry. It adds a rich depth of flavor to your food and can really help elevate your dishes from good to great. But it can also be expensive, hard to find, and tricky to work with—especially if you don’t have access to fresh truffles. That’s when substitutes come in handy!

In this article, we’ll take a look at seven great options for replacing truffle oil in your cooking without sacrificing flavor or authenticity.

What Is Truffle Oil?

Truffle oil is a flavoring made from olive oil, truffles, and other ingredients. It can be used to flavor and garnish dishes, although it’s usually added after cooking.

Truffle oil is made by infusing the aroma of truffles into olive oil. The process is time-consuming and expensive, so most truffle oils are made using artificial flavors instead of real truffles.

Truffle oil has a distinctive earthy aroma with hints of mushroom and garlic. It’s often described as “earthy” or “mushroom-y,” which makes sense if you think about how mushrooms grow underground.

It’s often used in dishes that already contain mushrooms or pasta; it also goes well with chicken, fish, eggs, potatoes and even popcorn!

Extra virgin olive oil does not have the same flavor as truffles. This is a great way to eliminate the truffle flavor from your cooking. Because of its herbaceous and grassy taste, many dishes that require truffle oil can be made with this oil instead.

If money is not an issue, truffle salt can be used as a substitute for truffle oil. This seasoning can be made by infusing salt and white or black truffles. It can enhance the flavor of food the same way as truffle oil.

Truffle salt is made by grinding dehydrated truffles into a fine powder and adding sea salt. It enhances the taste of any meal, whether it is sprinkled on top or mixed into.

But that’s not what the point is. You get many of the same benefits when you substitute truffle salt for truffle oils. It’s flexible because it can be used in both sweet and savory dishes. Salt is also less likely to spoil than oil, as it lasts longer than oil.

This is the best option for replacing truffle oil if you love the earthy, mushroomy flavor. It has a similar scent to your food so the taste is nearly identical. You will need to make this oil slightly more flavorful than white truffle oil to get the same taste. This is what you need to remember when replacing white truffle oil by Porcini oil.

It will take some effort to replicate the incredible flavor of White truffle oil. It takes little effort to find the right ratio for your dish. This oil is cheaper than truffle oil and it is also more affordable. This means that you shouldn’t worry about spending too much on this sub-subject.

In many condiments and seasoning mixes, Worcestershire sauce can be substituted for truffle oil. For a more authentic flavor, add some mushrooms.

Even if you don’t use the sauce, it will make a big difference in how your food tastes. It is easy to use and can be used in place of truffle oil in recipes.

If you like the way it tastes, you can adjust its flavor intensity by adding more of this substitute.

If you are looking for a mildly flavored oil that has a subtle unique flavor and aroma, hazelnut oil is your best bet. Virgin hazelnut oil is produced by pressing whole hazelnuts, rather than using a blending process or infusing process.

You can find cheaper alternatives that don’t contain pure hazelnut oil. However, they still have a pleasant hazelnut taste. Although this oil doesn’t have as much umami as other oils, it does have a pleasant, earthy, and sometimes tangy taste.

If you want to add an umami flavor to your recipes, mushrooms powder can be used as a substitute for truffle oil. This component is made from dried mushrooms that have been ground to a powder. It is often used as a flavoring or spice in soups, sauces, pasta dishes, and other meals.

You won’t notice any changes in the taste or appearance of the porcini mushroom powder when you use it as truffle oil. This component does not burn at the same temperature as oil. This means that less is required for baking and cooking.

So there you have it: the seven best substitutes for truffle oil. We hope you’ve enjoyed learning about these different options and that you’ll be able to incorporate them into your cooking in the future.

Remember, there are no right or wrong ways to use these ingredients—it’s all up to your own personal tastes! So don’t be afraid to try out new things and find what works best for you.

And lastly, we’d like to encourage you to keep a few of these substitutes on hand just in case you ever run out of truffle oil! You never know when they might come in handy!