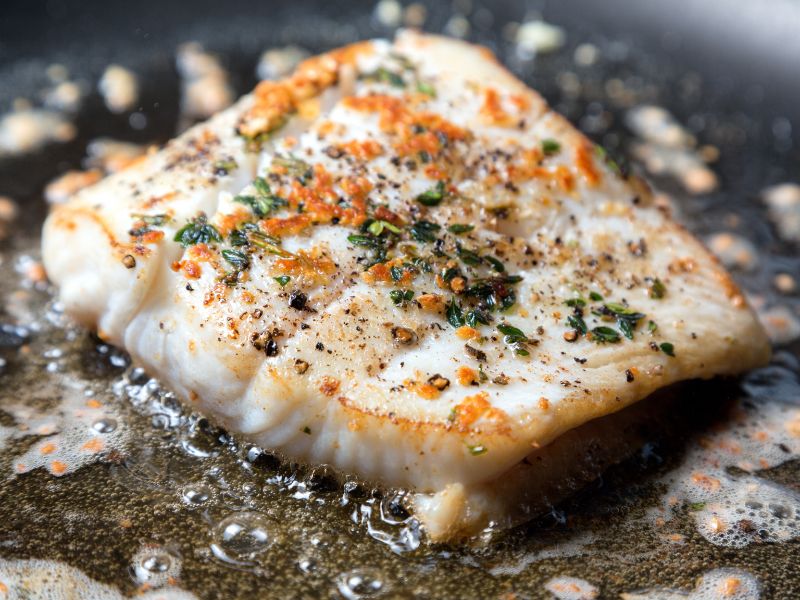 Halibut is a popular fish that is known for its rich, white meat. It can be prepared in various ways, such as pan-fried and grilled. Halibut is also used to make sushi and sashimi, and it can be served with soy sauce or teriyaki sauce.

There are several reasons people may choose to substitute halibut.

First, availability can be a factor in some regions. Halibut is not found in every part of the world, so if you’re traveling or shopping at a store that doesn’t carry it, you’ll have to look elsewhere.

Second, the cost is another reason people may substitute halibut. While it’s usually not more expensive than other fish, it can cost more than other types of seafood if you’re shopping at an upscale grocery store or restaurant. If you’re on a budget and looking for a good deal on seafood, this isn’t the fish for you—but that doesn’t mean there isn’t still plenty of delicious options out there!

Finally, dietary restrictions might influence your decision to substitute halibut. For example: if you’re vegetarian or vegan and want to make sure your meal includes plant-based proteins like soybeans rather than animal products like fish or meat then swapping out halibut for something like tofu will work just fine!

Cod is a white, flaky fish with a mild flavor. It’s often used in chowders or as a sandwich filling, and it can also be found in fish cakes, skewered and grilled, or even baked into fish sticks. When cooked, cod tends to be moist and flaky—but not always tender. If you’re looking for something similar to halibut in texture, then consider substituting cod instead.

Cod has a similar texture to halibut, but its flavor is milder and less buttery. Halibut is also more expensive than cod, so if your budget is tight, try using this substitute instead!

Sole is a flatfish, which means that it has both eyes on the same side of its head. It’s also an Atlantic fish, so you’ll see it on menus all around the East Coast, but it’s also found in the Pacific Ocean. It has a mild flavor and delicate texture, making it a great choice for people who aren’t huge fans of fish.

Sole is similar to halibut in terms of its mild flavor and delicate texture. However, sole tends to have a more delicate flavor than halibut, so if you’re looking for something that has a little bit more depth to its taste, then sole might be a better option than halibut for your cooking needs!

Flounder is a type of flatfish, and it’s often the best substitute for halibut because it has a similar texture and taste. Flounder is also a little more affordable than halibut, so you can enjoy your favorite fish without breaking the bank.

Flounder has a mild flavor, but it’s not quite as mild as halibut. It has a slightly sweet flavor that goes well with many different types of sauces and spices. Flounder is also quite versatile—you can make it into almost any dish that calls for white fish or seafood.

Sea bass is a fish that can be found in the Atlantic, Pacific, and Indian Oceans. It has a white color with a pinkish hue, and it has a firm texture. Sea bass is often served raw or lightly cooked, and it’s known for its mild flavor.

Sea bass is similar to halibut in terms of its mild flavor and firm texture, but sea bass has a lighter color than halibut (white instead of cream).

Grouper is a very popular fish that’s often used in dishes that call for halibut. It’s similar to halibut in terms of flavor and texture, but it’s also quite different—grouper has a much firmer texture and the meat tends to be more yellowish than white. And while halibut is generally considered a white fish, grouper can come in other colors like red and black.

So why would you want to use grouper instead of halibut? Well, if you’re looking for something with a stronger taste, then grouper might be better suited for your recipe. Grouper also tends to be less expensive than halibut and has fewer bones.

Mahi-mahi is a white, flaky fish that tastes a lot like halibut. The name “Mahi-mahi” comes from the Hawaiian language, and means “strong fish.” It can be cooked in a variety of ways: pan-seared, broiled or baked, grilled or fried. You can substitute mahi-mahi for halibut if you’re looking to save money or if you don’t have any on hand.

Mahi-mahi has a higher fat content than halibut, so it won’t taste as rich when cooked—but it’s still delicious! Its texture and taste are very similar to those of halibut, but with less of an oily aftertaste that some people don’t like about halibut.

The seventh substitute for halibut is pollock, which is a white-fish similar to cod and haddock. Pollock has a firm texture and mild flavor that makes it ideal for use in fish cakes, soups, and stews. Unlike other white-fishes, pollock does not need to be cooked through fully before serving.

Pollock is lower in calories than halibut and contains less cholesterol than both cod and haddock. It also contains slightly more protein than the other two fish species.

We hope you enjoyed our list of the 7 best substitutes for halibut.

Halibut is a versatile fish that can be prepared with many different flavors and styles, so it’s no wonder so many people are looking for the next best thing when they want to prepare this dish.

If you’re trying to cut down on your meat intake or just want a lighter meal, we recommend trying any of these substitutes!